Our Earth is the greatest phenomenon that I can think of!!!!
Life is a miracle!
This album is dedicated to showcase some of these
miracles and moments of beauty!
And - I'll be showcasing some of humanity's great
moments of ingenuity and imagination, as well!!!

My plan is to add a new photo or image
to this page every week or so, so be sure
to come back to see this growing collection!
Enjoy.... 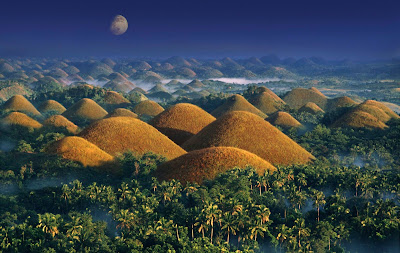 The Philipines are a clustered group of islands east of Thailand and Vietnam. Bohol is the name of one of these islands. 1700-odd conical hills dot the middle of the island; they range in height but are so regular in shape that they could be mistaken for being man-made. However, according to UNESCO they are the uplift of coral deposits and a result of rainwater erosion. The hills only earn their ‘chocolate’ nickname in the dry season when the foliage goes from lush green to brown. 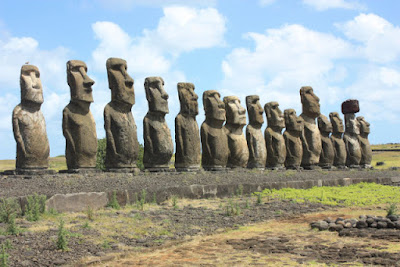 An advanced, seafaring and agricultural civilization called Rapa Nui, built more than 800 figure statues that are still a mystery to researchers, today! These Easter Island statues (moai) are enormous and they scatter the coastline… facing inland. The first ‘civilized’ (tongue in cheek!) encounter happened in 1722. The European explorers believed that the Rapa Nui were a people on the decline… although they were fed very well by the island’s inhabitants! The European’s believed that many people would have been needed to build these statues…. many more than the 3 000 who were living there at this time. This myth was strengthened when the island was revisited in 1724 and the population was less than ½ after just 2 years. Smallpox and plague, brought to the island by the European’s, was the real problem!!
The myths surrounding the collapse of the Rapa Nui, while grossly inaccurate, do create the perfect comparison to our age of environmental collapse due to resource depletion! Researchers have come to understand that the Rapa Nui’s lifestyle could benefit our civilization as they truly represent strategies that lead to cooperation, resilience and sustainability!!!
See For Yourself 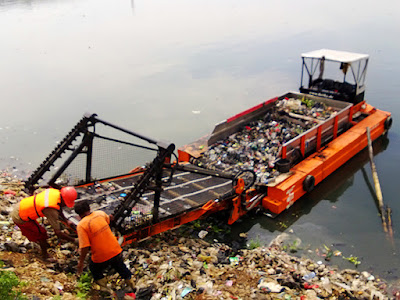 
I love learning about ways that humans are using creativity to solve important environmental problems.... like this garbage collection boat that collects waste from rivers and lakes before this waste enters into the oceans! Originally developed as a mowing boat for mowing and collecting water plants on the water surface, they were further developed to become an efficient garbage collection boat!
Learn more 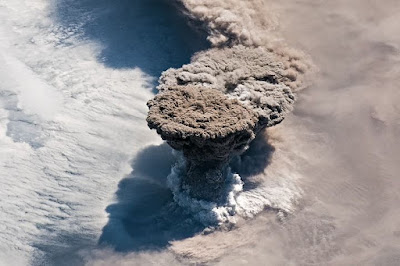 Hot off the presses - this happened just 4 days ago!!


NASA published an amazing photograph of the circular eruption column topping out at around 43,000 ft (13 km) altitude, during the peak phase of activity around noon of 22 June (local time).
It beautifully displays circular gravity waves in the plume head created by the overshooting and falling back of the ash-gas mixture of the plume at maximum height, where the plume's buoyancy has decreased to zero in the thinner atmosphere at altitude. 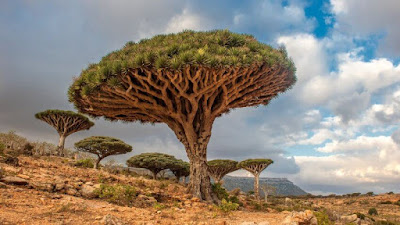 Socotra is one of the most beautiful islands in the world. It occupies an important geopolitical position and designated as a World Heritage Site. Cast adrift in the Indian Ocean, 200 miles from the Horn of Africa, Socotra is noted for its unique flora - 1/3 of its plants are found nowhere else on Earth!
Weird - I visited 5 websites and never is the name of this tree mentioned!

Eagle Rock - of Namibia.
While some parts of the sprawling Namib Desert feature towering orange sand dunes, in the Erongo region of Namibia it's all about the rocks. Here, erosion has worked its sculpting magic on granite, resulting in fantastic forms like this photo of Eagle Rock. Other vistas reveal huge rounded boulders set beneath monolithic jumbles of volcanic rocks formed millions of years ago. The Erongo is a hot, windswept place, and somewhat isolated, but its stark beauty and unspoiled terrain draws visitors. Tourism facilities are growing to meet the demand, including a few eco-lodges sitting in the shadow of towering Mount Erongo. 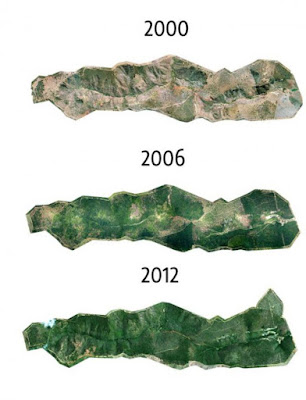 This project is the result of an ambitious initiative taken in the late 1990s by Lélia Deluiz Wanick Salgado and Sebastião Salgado. Confronting environmental devastation in and around a former cattle ranch bought from Sebastião Salgado’s family near the town of Aimorés, in Brazil’s state of Minas Gerais, they decided to return the property to its natural state of subtropical rainforest. They recruited partners, raised funds and, in April 1998, they founded the Instituto Terra, an environmental organization dedicated to the sustainable development of the Valley of the River Doce.

Since then, the couple’s dream has already borne much fruit. Thanks to the work of the Instituto Terra, which has now been declared a Private Natural Heritage Reserve (PNHR), some 17,000 acres of deforested and badly eroded land in a broad stretch of the Valley of the River Doce have undergone a remarkable metamorphosis. More than four million seedlings of the multiple species native to Brazil's Atlantic Forest have been raised in the institute’s own nursery. Those plants are now reforesting what was long known as the Salgado family’s Fazenda Bulcão, or Bulcão Farm, and are also contributing to similar environmental restoration programs in surrounding areas. 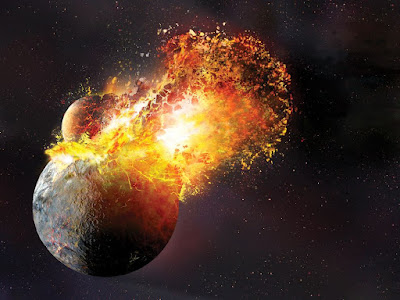 Around 4.5 billion years ago (give or take a few centuries), while the Earth was still forming, another smaller planet named Theia collided with our soon to be planet!  It was quite a spectacular event!!  Debris flew everywhere and then, very slowly – over the course of another few million years, the Earth’s gravitational pull helped to reform Theia into our moon.  This collision caused the Earth’s axis to shift to a delightful 23.5 degrees and this event set the stage for life to begin on our planet.  This miraculous realignment of our axis is the reason why we have four seasons in many parts of the world. 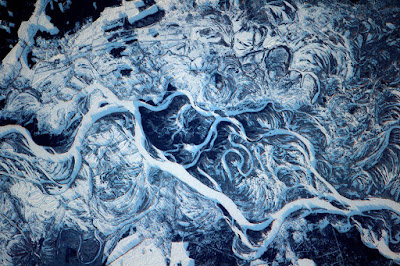 The Frozen Wild Dnieper River - Curling snow drifts are magnified by the terrain around the 1,400 mile Dnieper River, flowing from Russia to the Black Sea in this image from the International Space Station on Feb. 9th, 2017. 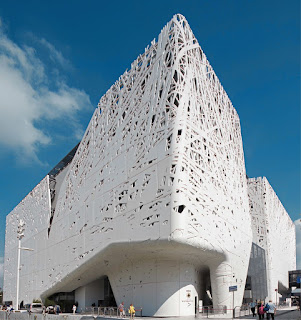 A Building That Eats Smog!
A new construction material could make the concrete jungle function a bit more like a natural one. Palazzo Italia, which debuted at the 2015 World’s Fair in Milan, is the first building made of concrete that’s designed to clear the air. The facade, a mixture of cement and titanium dioxide, captures nitrogen-oxide pollution and converts it into a harmless salt that easily rinses off the walls when it rains!! 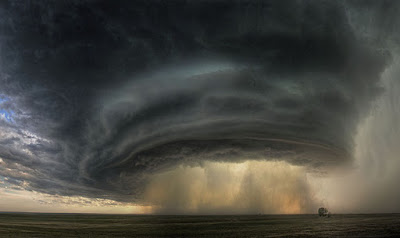 This impressive thunderstorm cloud is called a supercell. Such colossal storm systems center on mesocyclones -- rotating updrafts that can span several kilometers and deliver torrential rain and high winds including tornadoes. Jagged sculptured clouds adorn the supercell's edge, while wind swept dust and rain dominate the center. A tree waits patiently in the foreground. The above supercell cloud was photographed just west of Glasgow, Montana, USA, caused minor damage, and lasted several hours before moving on. 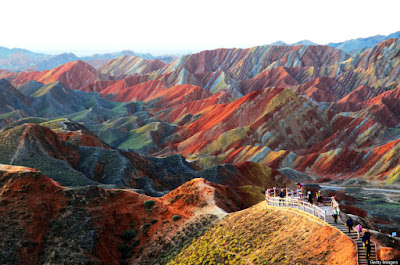 The “Rainbow Mountains”, part of the Zhangye Danxia Landform Geological Park in the Chinese province of Gansu, are one of the most unique geological landforms on Earth.  Over millions of years, layers of different colored sandstone and other minerals slowly formed on top of one another. Then, about 40-50 million years ago, plate tectonics kicked in.  You see, India actually used to be an island, until its tectonic plate began to collide with the Eurasian plate, upon which the main continent of Asia sits. The Indian plate crushed itself into the Eurasian plate at a rate of about 27 feet every hundred years.  This may not seem very fast, but when you consider the sheer size of the Indian tectonic plate, it’s easy to see how this collision made some major changes to the landscape.  The collision (which is responsible for creating the Himalayas) also buckled and crumpled the layered mountains in Gansu.