Jim Kogelheide is concerned that today’s generation won’t be leaving anything for the future.  In fact, he’s so adamant about protecting our future, he’s ready to share his vision with the rest of the province.

Kogelheide is currently on a walk from London to Northern Ontario.  His mission is to create public awareness about the desecration of Ontario’s last remaining old growth forest in the Temagami area.

During a stop in Cambridge on Wednesday, Kogelheide said he got involved in the walk in order to develop “a better understanding of man and the natural world and how we live with it.”

The first stage of the tour involved stops and presentations in Ingersoll, Woodstock, Stratford, New Hamburg, Waterloo, Kitchener Cambridge and Guelph.  The team will then drive from Guelph to Toronto due to lack of grass (for Mia’s paws) between those cities.  From Toronto, it will be the start of what Kogelheide called The Temagami Trail Tribute, which will see them walking to Temagami located north of North Bay.

The team got together after realizing that any form of protest to stop clearcutting of the province’s oldest forest growth dates back to 1989.  Back then, people physically closed roads in order to stop logging.  “It’s been seven years since then,” explained Kogelheide.  “Times have changed and lots of methods back then haven’t been too conclusive.”

Along with the walk itself, the expedition team is hoping to create a groundswell of public awareness through a letter writing campaign in order to convince Minister of Natural Resources Chris Hodgson to cancel the clearcutting which is expected to take place in the near future.

Kogelheide said they hope to arrive in Temagami in late September.  He then hopes to deliver letters to Hodgson following the walk.

Though the Temagami Trail Tribute has been fortunate enough to have assistance from a variety of sponsors, the team is surviving on donations.  Any money left over following expedition expenses will go towards the eco-tourism industry in Temagami.

Notes about this article by Jim Kogelheide 2015


1)      The article does continue on for three more paragraphs, but the information is irrelevant at this point so I didn’t copy it in this format.
2)      I have made two amendments to this article – both of which are written in italics print.
3)      It’s mentioned that the portion of our walk from Toronto to Temagami was called The Temagami Trail Tribute and that is a little incorrect.  The walk from London, Ontario to Toronto bore that name.
4)      We had no money left over from this walk – in fact it took us a while to pay off the small debt that we incurred – and so no donation to the Temagami eco-tourism industry was ever made.
5)      This journey was very inspiring and exhausting and after having reached Toronto we realized that we just couldn’t complete the second portion of our walk all the way to Temagami, so we had to be satisfied with what we had accomplished.
6)      This is the map showing the walking route that we took to visit all the 9 Southern Ontario towns.  Presentations were held in the towns marked with a circle. 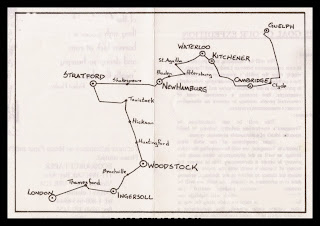 7)      Alan Trakinskas and I both made separate journeys to Temagami, shortly after this walk… but that’s another story!