For the last many months there have been many stories in the news about how the British Columbia NDP Provincial Government made many promises to protect local old growth forests... and how they broke their promise and now the old growth forests are under attack by companies who are clear cutting these areas.  The most significant forest stand is in the Fairy Creek area.

Yesterday, I heard about an event taking place in downtown London, Ontario, Canada designed to spread the word and encourage Londoners to sign petitions against the clear cutting! Devon and I attended.... 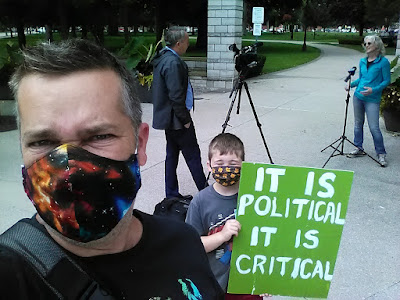 As you can see in the background of this photo, the local CTV News station sent out a reporter to interview some people.  Devon and I were not interviewed, but as we worked on creating a message on the sidewalk using chalk. the reporter filmed us and two clips of our work ended up in the television broadcast! This was very exciting for us both!
CTV London News Broadcast - July 30, 2021 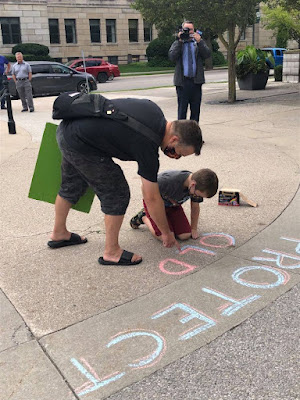 CBC radio was also there and Angela did interview me. She later sent me an email and told me that my interview segment did not make the final cut and I was not surprised... she interviewed many people and could only put together a short segment for the radio broadcast. On top of the radio broadcast, Angela also put together a written story for the CBC Facebook page.  She took our photo and that did make it into publication!!! 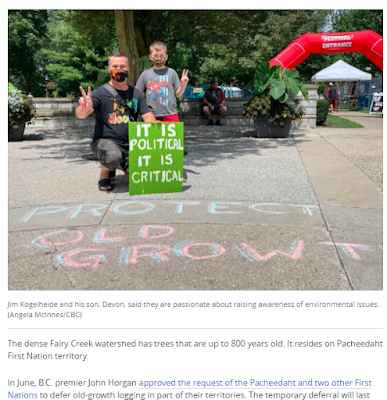 This is a screenshot from the CBC Facebook story!
CBC Facebook story - July 30, 2021
To understand this issue, even more, and to learn about the efforts by a fellow Londoner, I'll share this link to a great story about Tzeporah Berman and the many other activists dedicated to protecting our old growth forests....

Tzeporah Berman on her Fairy Creek arrest and old-growth

I hope that these news stories inspire people in different ways...
1) I hope they inspire people to realize that we need to stop the clear cutting of any forest stands but especially the old growth stands!
2) I hope that people see how easy it is to get involved in events to help raise awareness about important issues!
I feel that it's a sad state of affairs that clear cutting is still an issue in today's world! 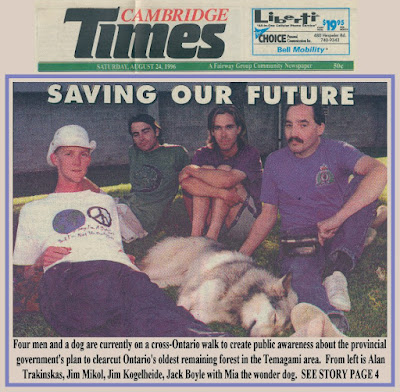 This is an article about a very large effort that I spearheaded over 25 years ago, to raise awareness about the clear cutting in the Temagami region of Northern Ontario! It seems that humanity still has much to learn about economics, industry and the value of Nature! I hope we can overcome these challenges before it's too late!